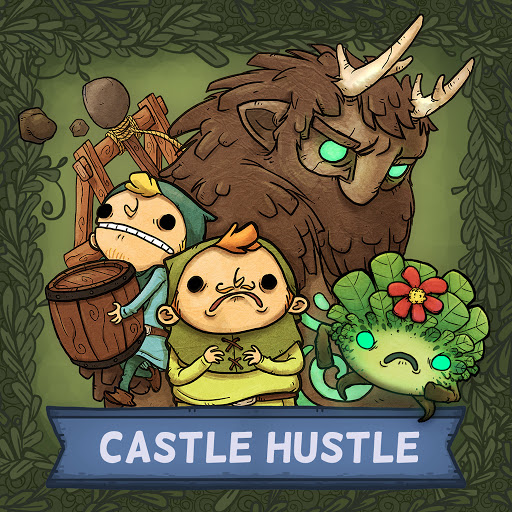 If you feel like facing a unique team-building challenge with your best group of friends, Castle Hustle is the perfect game for you. Put your skills to the test by connecting your smartphone instantly!

How do you play?

Castle Hustle is a multiplayer browser-based game for 1-6 players. Instead of playing against each other, this game is all about surviving as a team! Players work together to defend the King’s castle against an array of magical creatures, including large giants with looming green eyes. To survive in this game, players need to come up with strategies, such as maneuvering equipment, collecting ammunition, firing on attackers, managing everything the group needs, and making sure they stay alive.

Chaos is about to break loose, and your team of peasants is here to save the day! In this online video game, the King and his army are away, and it is up to you and your group to keep the castle in one piece. To keep the King’s castle safe, peasants can pick up objects, such as rocks and barrels, and fling them at the approaching giants. But you should keep an eye out – because they will be flinging objects at you, too!

While more and more enemies march toward the castle and time is running short, planning your actions ahead of time becomes key. The castle itself has flat and raised platforms, stairs to climb, and catapults just to keep things a little more interesting. One of the best parts about this game is that you can coordinate movements with your teammates across all of these channels. It is truly the only way to outdo the beasts who wish to tear the castle down.

As you play, you will probably notice another benefit to Castle Hustle – the simplicity of the movements of the characters. The flow is controlled by grid lines. These are the pathways that every character walks. This allows you to focus more on what is needed for success.

Keep in mind that it is not just the peasants who are set to walk on these pathways. The enemy giants are, too. This can be a blessing when you and a teammate are trying to plan an impromptu attack, or a curse if the gamers are not aware of the creatures coming at them until the last minute. Having all these factors to consider really makes the game an interesting one to play, and keeps the players involved. Remember that a lapse in concentration could kill all of the peasants and end the game!

Why is Castle Hustle so popular?

Castle Hustle shares some great qualities with similar games available right now. It is a very sociable video game, which means avid gamers can get other people involved whether they are at home, work, or a friend’s house. Castle Hustle is also a really well-balanced game – between attacking the enemies arriving at the Castle and working together to keep everything working as it should, the proactive group element can hold everyone’s interest all night long.

Castle Hustle allows gamers to show off some skills in warfare-like situations. Imagine successfully warding off a group of giants with your friends!

What’s great about this video game, as well as other AirConsole games, is that you can use your smartphone as a gamepad. Your smartphone will be your touchscreen as you coordinate with your teammates. Add in really awesome graphics, character emotions and reactions, and great music and this video game really is a winner. This is what creates a greater depth to the whole experience.

Who can play Castle Hustle?

Castle Hustle is designed for the same souls who frequent slightly more complex games than those with an arcade style core. It is great for any age range, so children, teens, and adults can all join in on the action. Try out AirConsole for your next birthday party or family get-together. If you are taking a lunch break at work, you can utilize this as a stress reliever. Your boss may even let you use it as a team-building group activity!

AirConsole sets itself apart from the competition by offering free online video games that do not require any additional software or hardware. There is no membership fee, so you can play games like Castle Hustle forever, free!

AirConsole released Castle Hustle at the start of 2016 and to a great reception. Not only that, but AirConsole recognized its huge potential straight away, awarding the team behind the game with the AirConsole Game Developer’s Contest First Prize earlier in the year. Platforms like AirConsole don’t just dish the prizes out unless the game is truly worthy – they know they have a good one to work with!

So what are you waiting for? Call together a group for your weekly game night and finally get your hustle on!