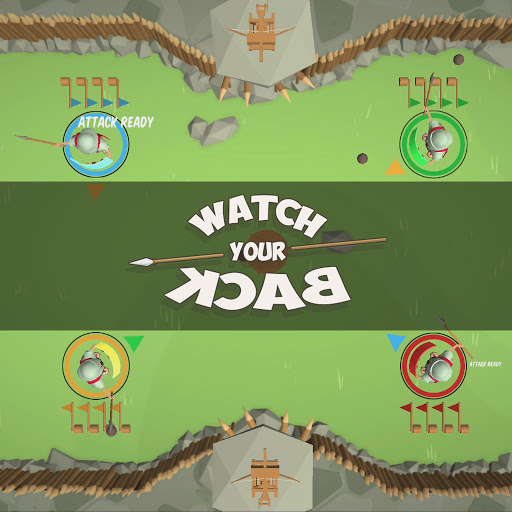 Watch Your Back on AirConsole

Watch Your Back is a newly developed game by AirConsole.  The main concept of this game is to create a game that uses simple controls where you engage in battle against your own friends. The game’s unique design of the arena reflects the Roman period times with animated characters. Watch Your Back is a very competitive game and creates a demanding atmosphere where every player is set on being the last man standing.

Watch Your Back can be played by 2 to 4 players. The players are motionless.  However, they can be rotated into place by using the button on either side of the screen of your smartphone. The rotating button plays two major roles in this game. First, it allows for you to project your spear at others and secondly, it is used to position the player’s shield so that it can prevent any incoming weapons such as spears and cannon balls from hitting them.

Each player has four chances before he dies in the game. Any four hits on any part of your body, except for the shield, results in a strike against you. A player who dies in the game is still given the opportunity to continue the game, however, is unable to be the winner. The dead player is equipped with an ancient military crossbow that will be used to battle with the remaining players. The player who survives all of the odds and remains standing until the end is declared the winner of the game.

This game is designed with fast paced motion and therefore to stand out as the winner, you must develop and master the approach of preventing your body from getting hit. Timing is also essential in blocking your opponent and knowing when to make your next attack on them. Watch Your Back is an extremely competitive game, and it will have you on the edge of your seat because each player is fighting to be the last one standing until the end.

The Team Behind the Game

AirConsole created this mind blowing game. AirConsole is a renowned gaming platform that is available online. This platform simply allows for your ordinary browser to be used as a video game console. A simple setup process is all that is needed before gaining access to AirConsole. The game platform works through the internet. A big screen (laptop, tablet or Smart TV) with internet access and a smartphone are the only devices needed to set up this platform. On the big screen, open up the browser to AirConsole’s website. By tapping on the start button, it will automatically start running the program onto your big screen and instantly a code will pop up. Select AirConsole’s site on your smart phone and open up the page. Next just enter the code that you see displayed on the screen, it will connect the smartphone to the big screen. This connection will allow for your smartphone to be used as your gamepad when playing on AirConsole. The code received can be used on multiple smartphones to get onto the platform.

Permission is now granted in selecting and playing a ton of games from AirConsole. Game categories include racing games, collaborative games, children’s games, sports games, and arcade style games. You are free to select a game from any of the categories. Many of the games have solo player and multiplayer options. Multiplayer games are all accessible through a shared screen.

Online gaming platforms are becoming more common because they cater to a global market and allow for you to play at any given time. It helps the player in coming up with new techniques to safeguard themselves. Timing is a skill that will greatly benefit the player. To be the last one standing, you need to combine your plan with the perfect timing to achieve this goal.

Test Your Skills with Watch Your Back

Are you looking for an immensely varied game that will throw you off of your seat? Watch Your Back is the game just for you. The control of this gamepad is intended to be very simple; however, the game is the total opposite. The core focus of the player should be protecting himself while knowing the exact time to strike at the other players to be the last survivor in the game. Even players who die in the game are still given the opportunity to attack other players, regardless of their weapon’s smaller magnitude.

Concentrate on shielding your body from getting hit and using your armor for protection. Carefully lay out your plan and take full advantage of the period where you can strike and take out the other players. In the end, it could be you alone standing.

Watch Your Back means a player should constantly be guarding his own back due to the spontaneity of when an attack can take place. Keep a watchful eye and you will surely be the one standing alone!