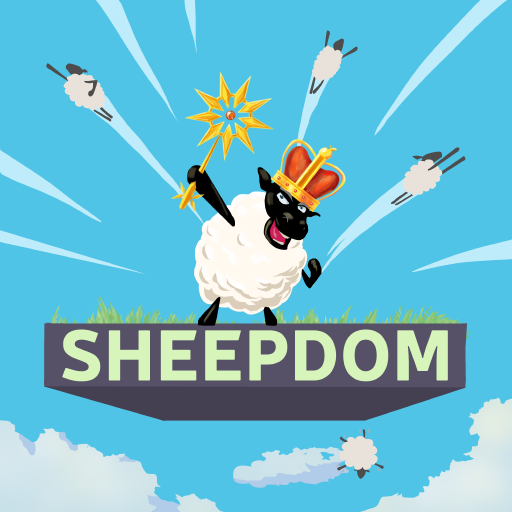 You are a sheep king of a small but rich grassy island. The subjects are happy with their bellies full and life is beautiful.

One morning another island flew by and an invader landed who started eating a ton and refused to share their gold. The king banished the invader sheep out and decided to retaliate.

He built a ballista, mounted an agent inside and catapulted her towards the horizon.

In Sheepdom 2 to 8 players engage into an arena type rumble, where the battle is carried out by catapulting your units at each other.

When your sheep hits an opponent king - you earn gold. Use the gold to upgrade units and perform actions.

Invader sheep will eat the grass and when it's all gone, the king will become vulnerable. Then a single hit at him will eliminate the player.

Be the last ruler alive to win the match.

Each basic sheep can be upgraded into a faster "small" sheep or stronger "armored" sheep. You can use them as is or upgrade even further:

The king can be upgraded to hit and run faster. He also has an ability to replant grass and a super strong "Smash" attack, which knocks all of the invader sheep which are on island at the moment of impact.

Try to achieve various goals during a match to earn "Golden Crowns". The winner will get double of his earned amount.

Golden Crowns will unlock you fancier crowns for your king and mightier scepters. Beware though, that Hero subscribers will get even more of them.

To learn more, press the (?) button on your controller while in menu. You can also tap-hold a button during a match to see an info tooltip.