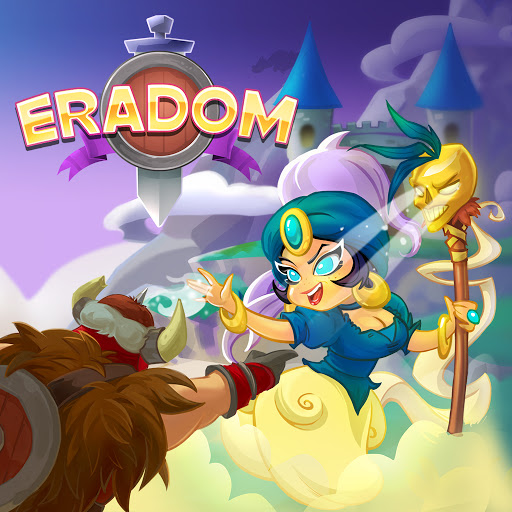 Eradom is a Castle VS Castle mix of several genres - arcade, strategy, tower defense and a tiny bit of RPG. The game focuses on large-scale decisions, instead of micromanagement. The gameplay evolves in three stages. First, you have to claim area on the battlefield. The more area you get, the more resources and strategic advantage you’ll have later on. Once there is no more free land left, you enter the tower defense phase where planning your kingdom layout is vital. Somewhere along the lines, there will be an attack event. It marks the start of the final phase - destroying the enemy castle. Your villagers are then converted into soldiers who will automatically look for the shortest path to the enemy. Note that your hero presence in a certain area will boost the performance of the nearby friendly units. Actively using your hero in battles will increase the odds of winning - a special skill will auto cast on each level up.

There are bonus creatures roaming the world that can influence the game outcome. For example, whoever manages to capture the dragon into a closed area, gets to tame it. The last few land patches will grant a powerful golem to the hero who claims them. You should try to take down the enemy castle as fast as you can since there will be a cataclysm event after a period of time. It may hit anywhere on the map and destroy everything residing in it.

The game features a lot of diversity and play styles, so even if you only managed to get a quarter of the total land, you can still win using smart planning and execution.