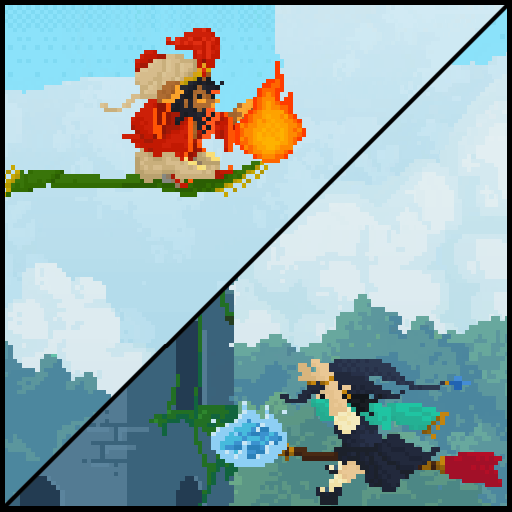 Crystal Control is one of our newer additions to our online video game collection. Crystal Control is a highly competitive shootout for two players. It is a nonstop rollercoaster of up and down thrilling action that is sure to keep both players on the edge of their seats. Crystal Control is designed for both experienced gamers who like fast-paced action, as well as casual players who want to add a little energy to their day.

How to Play Crystal Control

Like all of AirConsole's online formats, Crystal Control is super simple to play and only takes minutes to start. Each player's mission is to capture the center crystals on the screen so that they can use them as weapons to attack their opponents. Each crystal has its form of potency. For instance, when hit, the blue crystal launches a spread of small crystals towards the opponent. The red crystals act in the same way.

But the plot thickens. Each player is armed with either small, speedy bullet-shaped flames or large blazing fireballs. This determines their level of potency and how many bullets they spread at the enemy. The flames and fireballs have a dual role. They can be used to attack the enemy or to defend against oncoming crystals.

The whole concept behind Crystal Control was to engage multiple players in the game fully. Although it could have been designed as a single player game, AirConsole formats are more fun with more people. The P2P concept was more fitting for Crystal Control. This heightens the level of excitement and breeds healthy competition between players. Who's better? Start the game, pick a side and find out!

When playing Crystal Control, precision and timing is key. Moving too fast or too slow will lead to certain death. With good timing and precision, a player can easily navigate the spread of bullets no matter how many there are. As Crystal Control becomes more intense, more crystals are cast into the air making the game more challenging. As each player refines their skills, the games are more competitive, and the intensity rises. Only those who dodge the crystals while successfully beaming in on their opponent will win the game.

There's more to Crystal Control, however, than meets the eye. A skilled player will learn how to utilize the crystal against their enemy. This is achieved by using a combination of crystals all at once. Different shooting sequences can unleash a fury of crystals that make it almost impossible to dodge. If a competitor isn't careful, they can set off a chain reaction of crystals that backfire and turn on them. Learning which crystals to use and when to use them is half the battle.

Charging Up a Shot

A technique that players can use to boost the power of their arsenal is to power up a shot. This happens when the player remains in a stationary position. The longer the player can stay still the more powerful the shot becomes. Constant movement will only produce small bullet-shaped flames. By staying parked the flames turn into nasty fireballs that explode on impact.

Another motivation for creating a charged shot is to capture the center crystals. These crystals have more power than the outer layer of crystals and can do more damage in a short amount of time. Sitting still has never been so much fun. When fully charged, the ginormous fireballs can also wipe out a set of oncoming crystals instead of just one.

AirConsole is a quick fix for the casual gamer looking for a simple good time. What casual gamers love about AirConsole games is how easy they are to access. Rather than the frustration of never having enough controllers or the irritation of trying to figure out all the wires, AirConsole solved the problem by going wireless – you can use almost any smartphone to play. All players have to do is pull out their iOS or Android device and they instantly become controllers. Simply go to the website, punch in the code that is provided by the game and each player can begin. It's easy!

Good news! The AirConsole App is now available on the Apple app and Google Play stores. Players can now have instant access through the AirConsole app without having to go to AirConsole on their smartphone’s browser. The app works the same way as going online. Just enter the AirConsole website, choose Crystal Control and start the game. Open the app, punch in the code and begin playing instantly. The app offers features and benefits that are not found online. It is compatible with desktop, tablet or Android TV to use as the main screen. With wireless internet access, multiple players can now play all of AirConsole's games. The room just got more exciting!